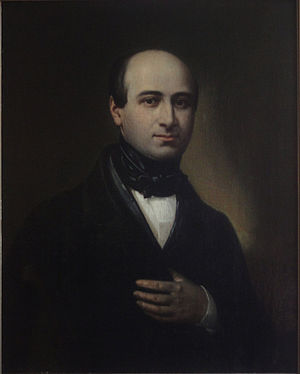 Portrait that was painted after his death

Andreas Gottschalk (1815–1849) was a German physician. He was a member of the Cologne community Communist League. According to Marx,[1] he was an exponent of the "Left" sectarian tendencies[1] of the German working class movement. He founded and was president in April 1848 of the Cologne Workers Association, an organization of 6,000 workers,[1] which he led until he was arrested together with Friedrich Anneke in June of that year and charged with inciting violence.[1] He was released from jail in December. After spending a short time abroad, he returned to Cologne, where he worked as a doctor for the poor until his death in the fall of 1849, having the previous year been "cheered on by a crowd of 5,000, called for the establishment of a revolutionary committee" as part of the 1848 revolts.[2] after contracting cholera himself.[3]

Gootschalk was present in Cologne when Marx was editor of the Neue Rheinische Zeitung there, however, Marx, who seemed to view him as a rival, condemned him as a "left-wing sectarian" due to his organization of an exclusively working class organization and advocacy of a boycott of parliamentary elections. An exclusively working class organization violated the current political line espoused by Marx of organizing mixed proletarian and bourgeoisie united front organizations. Intimidated, Gottschalk retired from the field and resigned from the Communist League, and when arrested for his activities and jailed for months awaiting trial, received little sympathy from Marx and his newspaper.[1]