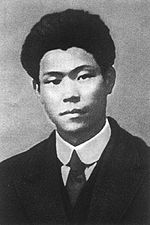 Cai Hesen 蔡和森
This is a Chinese name Wp→; the family name Wp→ is Cai.

Cai Hesen (Chinese Wp→: 蔡和森; pinyin: Cài Hésēn) (March 30, 1895 - August 4, 1931) was an early leader of the Chinese Communist Party, and a friend and comrade-in-arms of Mao Zedong. His courtesy name was Run Huan (润寰), and he was also known as He Xian (和仙), Zhe Ying (泽膺), and Lin Bin (林彬). Cai was originally from Shuangfeng County Wp→ in Hunan Province.

Cai was born in Shanghai on March 30, 1895.In the spring of 1899, Cai came back to his hometown Shuangfeng County Wp→ with his mother. In his youth, he studied at Hunan First Normal School and at the Higher Normal School in Changsha(长沙). Cai studied under Yang Changji, and joined student movements.In June 1917, after he graduated, Cai didn't return home, he took an active part in revolutionary activities. In April 1918, he organized the Xin Min Xue Hui (New People's Study Society) with Mao Zedong and others， which caused strong influence in the youth of Hunan province. Cai participated in a number of labor movements after this. In 1919 Christmas, he traveled to France with his mother Ge Jianhao(葛健豪), his sister Cai Chang(蔡畅), and his girlfriend Xiang Jingyu(向警予). In Paris, Cai organized an "Work and Study Cooperative Society" (Gongxue huzhu she)and accepted communism. He studied hard in France, refused to lessen his workload, and translated foreign works into Chinese.In May 1920, Cai married Xiang Jingyu.[1] 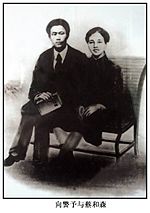 In the latter half of 1921, Cai was arrested by the French government for organizing a wave of worker disputes, and was forcefully banished from the country soon after. With his wife Xiang Jingyu, he returned to China to participate in the founding of the Chinese Communist Party and work in the Party's central organization. He founded the first newspaper , The Wizard (向导), of the CCP's central authority. Cai was a member of the 2nd, 3rd, 4th, 5th, and 6th Central Committees of the Communist Party of China, as well as a member of the 5th and 6th Central Political Bureaus and other important positions. In 1925, he served as the CCP's representative to the international Communist movement. In 1927, he returned to China, but went to Moscow again in 1928 to cure disease. In 1931 he returned to Shanghai to support the Guangdong provincial People's Committee. He then went to Hong Kong to direct party work. He was arrested by the British police, delivered to Chinese authorities in Canton, and executed.[2]

In 1931, Cai was betrayed by Gu Shunzhang(顾顺章) when he attended a meeting in Hong Kong, he was arrested by the Hong Kong police. He was then extradited to Guangzhou province. There he was tortured by Guangdong warlord Chen Jitang Wp→(陈济棠), but he refused to say a word against his comrades. Finally, in August 1931, Cai was crucified with iron nails on the wall of his prison and his breast was stabbed.He was 36 years old at the time of his death.

Cai Hesen's father was Cai Rongfeng(蔡蓉峰), and his mother was Ge Jianhao. His first wife was Xiang Jingyu, second wife was Li Yichun(李一纯), and he had a younger sister who was Cai Chang. In particular, Cai Chang became the wife of Li Fuchun(李富春).

In total, Cai had four children. He had Cai Ni(蔡妮) and Cai Bo(蔡博) with Xiang Jingyu, and Cai Zhuan(蔡转) and Cai Lin (蔡霖)with Li Yichun. Cai Chang had only one daughter, Li Tete.