Mongolia is a state located in northeastern Asia. A portion of the Mongolian nation lives in Inner Mongolia, a province of the People's Republic of China. Mongolia borders Russia to the north and China to the south. In the 13th century the Mongolian people conquered and occupied the bulk of the Eurasian continent, but their rule was short-lived. The Russian Empire, as it did in central Asia, and even in Tibet, attempted to gain influence in Outer Mongolia, the northern portion of Mongolia where very few Chinese lived, see Outer Mongolia (1911–1919) Wp→ In 1915 they succeeded in signing a treaty the Treaty of Kyakhta Wp→ with China and the Mongolians under which Russia and China recognized Outer Mongolia's autonomy (as part of Chinese territory); Mongolia recognized China's suzerainty, and autonomous Mongolia had no right to conclude international treaties with foreign countries respecting political and territorial questions. The treaty severely curtailed the independent status of Mongolia which had been declared in 1911, but eventually became moot after the October Revolution of 1917, and the declaration of the Mongolian People's Republic in 1921 after Soviet occupation during the Russian Civil War.

During the Russian Civil War the White Russian adventurer Baron Ungern led his troops into Mongolia in October 1920, defeating the Chinese forces in Niislel Khüree (Ulaanbaatar) in early February 1921. In order to eliminate the threat posed by Ungern, Bolshevik Russia decided to support the establishment of a socialist Mongolian government and army. This Mongolian army took the Mongolian part of Kyakhta from Chinese forces on March 18, 1921, and on July 6 Russian and Mongolian troops arrived in Khüree. Mongolia's independence was declared once again on July 11, 1921.[1] These events led to Mongolia's close alignment with the Soviet Union over the next seven decades. The Soviet Union initially recognized China's claims over Outer Mongolia and advised the Mongolians to limit their demands to autonomy, but as an indigenous independence movement, chiefly among the youth of the Mongolian Revolutionary Youth League, developed the Soviets gradually warmed to support of independence.[2]

In 1924, after the death of the religious leader and khan, Bogd Khan, a Mongolian People's Republic was proclaimed with support from the Soviet Union. 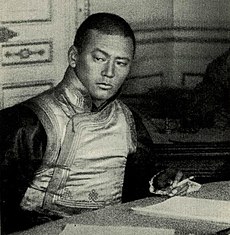 As of 1918 a census showed about 500,000 Mongolians, mostly impoverished herdsmen or low ranking lamas; about 100,000 Chinese traders and craftsman, and about 5,000 Russians. Much of the land and stock were the property of native nobility and monasteries; many of the Mongolians were serfs or rented cattle from monasteries. Literacy was generally limited to lamas who were the only people available to perform government functions. The Chinese considered themselves to have dominion over the country, a claim which generally had international recognition. Establishing independence from China and from the feudal-theocratic traditional government was the goal of the young revolutionaries. Thus, initially, Mongolia was a Soviet state without being a socialist state.

Error creating thumbnail: File missing
This article about a nation is a stub. You can help Communpedia by expanding it.