This article is about the capital of North Korea. For other uses, see Pyongyang (disambiguation). Not to be confused with Pyeongchang.

Pyongyang (평양, Korean pronunciation: [pʰjɔŋjaŋ], literally: "Flat Land") is the capital of the Democratic People's Republic of Korea, commonly known as North Korea, and the largest city in the country. Pyongyang is located on the Taedong River and, according to preliminary results from the 2008 population census, has a population of 3,255,388.[1] The city was split from the South P'yŏngan province in 1946. It is administered as a directly governed city (chikhalsi), on the same level as provincial governments, not a special city (teukbyeolsi) as Seoul is in South Korea.

One of Pyongyang's many historic names is Ryugyong (류경; 柳京), or "capital of willows", as willow trees have always been numerous throughout the city's history, and many poems have been written about these willows. Even today, the city has numerous willow trees, with many buildings and places having "Ryugyŏng" in their names. The most notable of these is the uncompleted Ryugyong Hotel. The city's other historic names include Kisong, Hwangsong, Rakrang, Sŏgyong, Sodo, Hogyong, and Changan.[citation needed]

In 1955, archaeologists excavated evidence of prehistoric occupation in a large ancient village called Kŭmtan-ni, in the Pyongyang area, from the Chŭlmun and Mumun pottery periods.[2] North Koreans associate Pyongyang with "Asadal" (아사달; 신시), or Wanggomsŏng (왕검성; 王儉城), the first capital (second millennium BC) of the Gojoseon kingdom according to Korean history books, notably Samguk Yusa. Many South Korean historiansWho? deny this claim, because other Korean history booksTemplate:Which? place Asadal around the Liao River located in western Manchuria. Also, such may have been asserted by North Korea for the use of propaganda. Nevertheless, Pyongyang became a major city under Gojoseon. 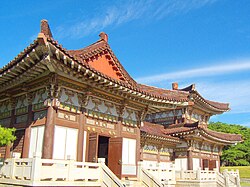 It is likely that the area of Pyongyang belonged to Wiman Joseon, the longest-lasting part of Gojoseon, which fell in the Gojoseon-Han war in 108 BC. Emperor Wu of the Han Dynasty ordered four commandries set up, with Lelang Commandery in the center, and its capital established as "Pingrang" or "Pyongyang".Several archaeological findings from the Later Eastern Han (25-220) periods in the Pyongyang area seems to suggest that Han forces later launched brief incursions around the area of Pyongyang.

The area around Pyongyang was called Nanglang during the early Three Kingdoms period. As the capital of Nanglang kingdom (낙랑국; 낙랑),[3] Pyongyang remained an important commercial and cultural outpost after Lelang was destroyed by an expanding Goguryeo in 313 AD.

Goguryeo moved its capital here in 427. According to Christopher Beckwith, Pyongyang is the Sino-Korean reading of the name they gave it in their language, Piarna, or "level land".[4]

In 676, Pyongyang was taken by Silla but left on the border between Silla and Balhae until the time of the Goryeo dynasty, when the city was revived as Sŏgyŏng (서경; 西京; "Western Capital"), although it was never actually a capital of Goryeo. It was the provincial capital of the Pyeongan Province during the Joseon dynasty.

The importance of Pyongyang declined in the late sixteenth century, when the Japanese conquered it, and the city was further damaged when it was overrun by the Manchus early in the seventeenth century. After the invaders left, Korea withdrew from international contact, and Pyongyang, like other Korean cities, was largely closed to the outside world for nearly three centuries.[5]

In the 19th century Pyongyang became a base for Protestant missionaries in the country. The city soon had the largest Christian population in Korea and by 1890 it was reported that Pyongyang had more than 100 churches, most of which were Protestant.[5]

In 1890, the city had 40,000 inhabitants.[6] It was the site of an important battle during the First Sino-Japanese War, which led to the destruction and depopulation of much of the city. However, it was the provincial capital of South Pyeongan Province from 1896. Under colonial rule, the city became an industrial center, known in Japanese as Heijō. By 1938, Pyongyang had a population of 235,000.[6]

In 1945, the 25th army of the Soviet Army entered Pyongyang, and it became the temporary capital of Provisional People's Committee for North Korea. Pyongyang Commercial School was on Mansudae Hill, with the provincial government building behind. The provincial building was one of the finest buildings in Pyongyang. The Soviet Armed Forces assigned it as their headquarters and allotted City Hall to North Korean officials, while the Communist Party's headquarters were assigned to the Revenue Office.[7] It became the de facto capital of the Democratic People's Republic of Korea at its establishment in 1948. At that time, the Pyongyang government aimed to recapture Korea's official capital at that time, Seoul. Pyongyang was again severely damaged in the Korean War, during which it was briefly occupied by South Korean forces. In 1952, it was the target of the largest aerial raid of the entire war, involving 1,400 UN aircraft. After the war, the city was quickly rebuilt with Soviet aid, with many buildings built in Socialist Classicism. The rebuilt city featured extensive parks, broad boulevards, and high-rise apartments. Pyongyang became the political, economic, and transportation center of North Korea. In 1962, the city had a population of 653,000. The population grew to 1.3 million in 1978 and to more than 3 million by 2007.[6]

There are numerous newer hotels and office buildings that stand empty as a result of the country's economic isolation. Vehicles are a rarity, and some roads are in a poor condition.[8][9]

Pyongyang is located in west-central North Korea; the city lies on a flat plain about 50 km (30 mi) east of the Korea Bay, an arm of the Yellow Sea. The Taedong River flows southwestward through the city toward the Korea Bay.

The climate of Pyongyang is a humid continental climate (Köppen climate classification Dwa). Cold, dry winds can blow from Siberia in winter, making conditions very cold; the temperature is usually below freezing between November and early March, though the average daytime high is a few degrees above freezing in every month except January. The winter is generally much drier than summer, with snow falling thirty-seven days on average.

The transition from the cold, dry winter to the warm, wet summer occurs rather quickly between April and early May, and there is a similar rather abrupt return to winter conditions in late October and November. Summers are generally hot and humid, with the East Asian monsoon taking place from June until August; these are also the hottest months, with average temperatures of Template:Convert/°C to Template:Convert/°C, and daytime highs often above Template:Convert/°C.

For the first few decades of North Korea’s history, Pyongyang was not officially considered the capital of the country. The regime in the North positioned itself as the sole legitimate government of the entire Korean peninsula, so until 1972, the North Korean Constitution designated Seoul as the country's capital. According to the official discourse of the time, Seoul was considered to be under the occupation of the American forces and their South Korean client. Pyongyang, in this scheme of things, was merely the provisional headquarters of the peninsula’s sole government, to be used only until the eventual liberation of Seoul. In 1972, Pyongyang was officially promoted to the status of national capital.[10]

Foreign media reports in 2010 stated that Kangnam-gun, Chunghwa-gun, Sangwŏn-gun, and Sŭngho-guyŏk had been transferred to the administration of neighboring North Hwanghae province.[12]

The capital has been completely redesigned since the Korean War (1950–1953). It is designed with wide avenues, imposing monuments, and monolithic buildings. The tallest structure in the city is the uncompleted 330-metre (1,083 ft) Ryugyŏng Hotel. This hotel has 105 floors and encloses 361,000 square metres (3,885,772 sq ft) of floor space. The original plan called for crowning it with seven revolving restaurants.

Notable landmarks in the city include:

Pyongyang TV Tower is a minor landmark. Other visitor attractions include the Korea Central Zoo and the large golden statue of Kim Il-sung The Arch of Reunification has a map of a united Korea supported by two concrete Korean women dressed in traditional dress straddling the multi-laned (but not completely paved) Reunification Highway, which stretches from Pyongyang to the Korean Demilitarized Zone (DMZ).

As of 2011[update] current construction includes claimed 100,000 new homes in the city, including a large project along Changjeon Street. This is the top construction priority and uses KPA soldiers as labor. Supposedly construction plans began after Kim Jong Il described the area as "pitiful".[13] 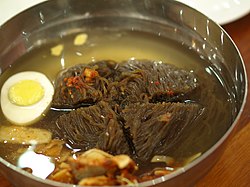 Pyongyang was the provincial capital of Pyeongan province until 1946.[14] Therefore, Pyongyang cuisine shares with the general culinary tradition of the Pyeongan province. The most famous local food is Pyongyang naengmyeon, or also called mul naengmyeon or just simply naengmyeon. Naengmyeon literally means "cold noodles", while the affix, mul, refers to "water" because the dish is served in a cold broth. Naengmyeon consists of thin and chewy buckwheat noodles in a cold meat broth, and dongchimi (watery kimchi) and topped with a slice of sweet Korean pear. Pyongyang naengmyeon was originally eaten in homes built with ondol (traditional underfloor heating) during the cold winter, so it is also humorously called "Pyongyang deoldeori" (shivering in Pyongyang). Pyongyang locals sometimes enjoyed it as a haejangguk, which is any type of food eaten as a hangover cure, usually a warm soup.[15]

Another representative Pyongyang dish is Taedonggang sungeoguk, meaning "trout soup from the Taedong River". The soup is made with trout, which are abundant in the Taedong River, along with black peppercorns and salt.[16] It is served as a courtesy to important guests visiting Pyongyang. Therefore, the question, "How good was the trout soup?" is commonly used to greet people returning from Pyongyang. Another local specialty is Pyongyang onban (literally "warm rice of Pyongyang"). It is a dish made with freshly cooked rice topped with sliced mushrooms, chicken, and a couple of bindaetteok (pancakes made from ground mung beans and vegetables).[15]

Pyongyang Station serves the main railway lines, including the Pyongui Line and the Pyongbu Line.

The city also has regular international rail services to Beijing and Moscow. A journey to Beijing takes about 25 hours and 25 minutes (K27 from Beijing/K28 from Pyongyang, on Mondays, Wednesdays, Thursdays and Saturdays); a journey to Moscow takes 6 days. The city also connects to the Eurasian Land Bridge via the Trans-Siberian Railway.

There is also a 53 km (33 mi) long Pyongyang tram system and a 150 km (93 mi) Pyongyang trolleybus system. The trolley bus-stops are fairly busy. It is difficult to gauge how widely the metro is used, as tourists are permitted to travel only between designated stops with a guide.

There are few automobiles in the city, as cars are a symbol of status in the country due to their scarcity as a result of restrictions on import because of international sanctions and domestic regulations. Typically, only party bureaucrats drive automobiles.[2]

Pyongyang is surrounded with checkpoints manned by National Security Agency forces, controlling movements at the city limits. At these checkpoints, which cover all major roads in and out of the capital (Junghwa No.10 on the road in from Hwangju, Seopo No.10 from Pyongsung, Majang No.10 from Pyongnam and Saeumul No.10 from Wonsan), checks include transit permits and comprehensive investigation of individual items of freight.[18]

Please use day/month/year dates when editing this article.