Please use day/month/year dates when editing this article.
This article needs to have better references

The UNASUR Constitutive Treaty was signed on 23 May 2008, at the Third Summit of Heads of State, held in Brasília, Brazil.[5] According to the Constitutive Treaty, the Union's headquarters will be located in Quito, Ecuador.[2] On 1 December 2010, Uruguay became the ninth state to ratify the UNASUR treaty, thus giving the union full legality.[6][7] As the Constitutive Treaty entered into force on 11 March 2011, UNASUR became a legal entity during a meeting of Foreign Ministers in Mitad del Mundo, Ecuador, where they had laid the foundation stone for the Secretariat Headquarters.[8] The South American Parliament will be located in Cochabamba, Bolivia, while the headquarters of its bank, the Bank of the South are located in Caracas, Venezuela.[2]

On 4 May 2010, at an extraordinary heads of state summit held in Campana, 75 km (47 mi) north of Buenos Aires, former Argentine President Néstor Kirchner was unanimously elected the first Secretary General of UNASUR for a two-year term. This new office was conceived as a first step towards the establishment of a permanent bureaucratic body for the supranational union, eventually superseding Mercosur and CAN political bodies.

At the Third South American Summit on 8 December 2004, presidents or representatives from 12 South American nations signed the Cusco Declaration, a two-page statement of intent announcing the foundation of the South American Community. Panama and Mexico attended the signing ceremony as observers.

The group announced their intention to model the new community after the European Union including a common currency, parliament, and passport. According to Allan Wagner Tizón, former Secretary General of the Andean Community, a complete union like that of the EU should be possible by 2019.

The mechanics of the new entity came out of the First South American Community of Nations Heads of State Summit, which was held in Brasília on 29–30 September 2005. An important operating condition of UNASUR is that no new institutions will be created in the first phase, so as not to increase bureaucracy, and the community will use the existing institutions belonging to the previous trade blocs.

References in this section could be improved.

Between the 15th and 19th centuries, the Spanish and Portuguese colonization brought about the establishment and development of colonial empires in the Americas that integrated politically, economically and culturally vast extensions of the continent each with their respective metropolis.

Since the Spanish American wars of independence a trend towards the political integration of the newly born republics of Hispanic America became strong in the thinking of several independence leaders, influenced in turn by the Spanish Enlightenment and the French and American revolutions. A notable early exponent of this trend was Francisco de Miranda, who envisioned a federated republic encompassing all of Hispanic America, which he called "Colombia".

The independence war efforts saw the concurrence of integrated armies composed by Spanish Americans of diverse regions on both sides of the conflict (v.g. Patriots and Royalists), and fighting all over the territories of many future nations. For example, the Army of the Andes which was gathered in the United Provinces of the Río de la Plata fought in Chile, Peru and Ecuador, and later integrated with Simón Bolívar's Army (which itself included troops of future Venezuela and Colombia) to further fight in Peru and the Upper Peru

By the 1820s, the main proponent of a federation of the newly born republics was Simón Bolívar, although this idea was shared by many contemporaneous, notablly including José de San Martín and Bernardo de Monteagudo, under either republican or constitutional monarchical governments. In 1826, Bolívar summoned a conference to be held in Panama, which was to be known as the "Amphictyonic" Congress of Panama because of the parallelism with the Hellenic Amphictyonic League. The Congress was attended by Gran Colombia (including present-day Colombia, Venezuela, Panamá and Ecuador), the Federal Republic of Central America (including present-day Costa Rica, Nicaragua, El Salvador, Honduras and Guatemala), the United Mexican States, and Peru. The ostensible intention was to form a defensive league that could prevent foreign expansionism and foster the interests of the Spanish American republics. The Congress' conclusions, however, were not ratified by the participants, except for Gran Colombia. Soon after, both Gran Colombia and the United Provinces of Central America fell apart and the whole of Hispanic America was balkanized by competing national governments.

The complete integration between the Andean Community and the Mercosur nations was formalized during the meeting of South American heads of state that took place on 23 May 2008 in Brasília.[9]

In the 2004 South American Summit, representatives of twelve South American nations signed the Cuzco Declaration, a two-page letter of intent announcing the establishment of the then-named "South American Community of Nations". Panama and Mexico were present as observers. The leaders announced the intention of modeling the new community in the mold of the European Union, including a unified passport, a parliament and, eventually, a single currency. The then Secretary General of the Andean Community Allan Wagner speculated that an advanced union such as the EU should be possible within the next fifteen years.

On 28 December 2005, Chilean former foreign minister Ignacio Walker proposed that the Union's former designation, the South American Community of Nations, abbreviated as CSN, be changed to South American Union; nevertheless, many members stated to him that that proposal had already been rejected to prevent confusion since its acronym of U.S.A. (Spanish: Unión Sudamericana) would be easily confused for the United States of America.

The name was finally changed on 16 April 2007 to Union of South American Nations. The new name was jointly agreed by all member states during the first day of meeting at the First South American Energy Summit,[10] held at Isla Margarita, Venezuela.

At the moment, the provisional structure of the UNASUR is as follows:

Extraordinary meeting of heads of state and the UNASUR government held in Brasília.

They are nine Ministerial Councils of the Unasur.[16]

UNASUR has also initiated the creation of electoral monitor teams that could replace the monitors from the OAS.[17]

One of the initiatives of UNASUR is the creation of a single market, beginning with the elimination of tariffs for non-sensitive products by 2014, and for sensitive products by 2019. The process is to be developed upon the progressive convergence of the procedures of pre-existing Mercosur and CAN subregional economic blocks.[citation needed]

Presidents of the seven founding countries (Argentina, Bolivia, Brazil, Ecuador, Paraguay, Venezuela and Uruguay) officially launched the South American Bank in Buenos Aires in December 2007. The heads of all the founding countries were at the ceremony, with the exception of President Tabaré Vázquez of Uruguay. The capital will be US$7b, with Venezuela responsible for US$3b and Brazil US$2b. The headquarters will be located in Caracas with offices in Buenos Aires and La Paz.[18][19]

The Bank of the South will finance economic development projects to improve local competitiveness and to promote the scientific and technological development of the member states.

The founding chart affirms that the Bank will promote projects in "stable and equal" manner and priorities will be pointed to reinforce South American integration, to reduce asymmetries, and to promote egalitarian distribution of investments.

The Brazilian Minister, Guido Mantega, stated that the bank is not similar to the International Monetary Fund; it will be a credit institution similar to the World Bank.

Presidents and other members of UNASUR at the First Brasília Summit, 29 September 2005.

Presidents of UNASUR member states at the Second Brasília Summit, 23 May 2008.

The South American Defence Council (CDS) was proposed by Venezuela and Brazil to serve as a mechanism for regional security, promoting military co-operation and regional defence. From the beginning Brazil, Argentina and Chile, the countries that took the leadership of the project, made clear that they did not intend to form a NATO-like alliance, but a cooperative security arrangement, enhancing multilateral military cooperation, promoting confidence and security building measures and fostering defense industry exchange. Colombia initially refused to join the defence council due to the strong military ties it has with the United States through the Plan Colombia. However after reviewing the proposal they decided to join on 20 July 2008.[20][21]

Shortly following the signing by Colombia's President, President of Chile Michelle Bachelet appointed a working group to investigate and draft a plan for the new council. Finally, on 10 March 2009, the 12 nation members held, in Chile, the first meeting of the newly formed council.[22]

In mid-2010, UNASUR played a key role in mediating the 2010 Colombia–Venezuela diplomatic crisis. On 1 September 2010, the agency "UnasurHaití" was created to provide US$ 100 million in help to Haiti.[23]

Visits by South American citizens to any South American independent country of up to 90 days only require an identification document issued by the traveler's country. In 24 November 2006, Argentina, Bolivia, Brazil, Chile, Colombia, Ecuador, Guyana, Paraguay, Peru, Suriname, Uruguay and Venezuela abolished visa requirements for tourists between any of those nations.

Mercosur, Bolivia and Chile established that their territories together form an "area of free residence with the right to work" to all its citizens, with no additional requirements other than nationality. The Free Movement and Residence Agreement was established in the Brasília summit based in a previous document signed in 6 December 2002.[24]

Citizens of any Mercosur countries will have a simplified process in temporary residence visa of up to 2 years in any other member countries, with the requirements of a valid passport, birth certificate, and no criminal record. Temporary residence can become permanent if a licit means of living can be verified.[25]

Brazil has introduced a new temporary residency program for citizens of Argentina, Bolivia, Chile, Paraguay, and Uruguay. Under the new program, eligible citizens of these countries will benefit from a simplified application process, which can be completed from within Brazil. If successful, they will receive a two-year residency status, after which they will be eligible for permanent residency.

Eligible citizens of the Mercosur member countries (Argentina, Paraguay, and Uruguay) and two Mercosur "associated countries" (Chile and Bolivia) can now apply for a special two-year temporary residency program in Brazil using a simplified application process. The new program was introduced by a government decree published on 8 October 2009, but administrative delays prevented the new program from being implemented until now.(Date needed)

Under the new program, natural-born citizens of these countries, or individuals who have held citizenship in these countries for at least five years, plus their legal dependents (regardless of nationality), may obtain temporary residency status in Brazil that will remain valid for two years. The temporary residency program is not linked to a specific employer, and from an immigration perspective, these residents are eligible to work for any employer in Brazil. After the first two years, the candidate is eligible for permanent residency.

Nationals of these five countries may apply for this residency program abroad at a Brazilian consular post or from within Brazil to the Brazilian Federal Police. Applicants must demonstrate their identity, citizenship and good character by presenting documents requested by immigration authorities, such as: passports, identity cards, or nationality certificates issued by their country of origin's consular post; birth certificates; marriage certificates (if applicable); declarations of criminal clearance or criminal clearance certificates; and registration fees.[26] 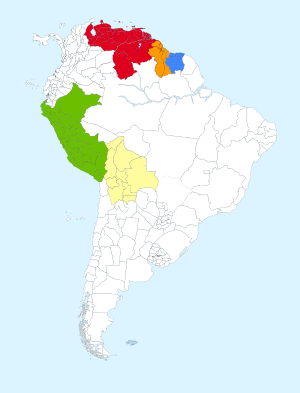 UNASUR member states. (Territories in white not part of UNASUR.)

The following territories situated outside South America are part of member states and therefore participate:

The following parts of South America are territories of non-South American states and therefore do not participate:

1 South Georgia and the South Sandwich Islands are commonly associated with Antarctica.

There have been other presidential extraordinary meetings, such as: