Persons associated with the subject may have played a substantial role in creating and editing this article.

The Communist Party of Great Britain (Marxist–Leninist) is a British Marxist-Leninist political party that is guided by scientific socialist and communist understanding and principles. Their youth wing, Red Youth, is noted to be increasingly active, and has widely circulated its statement of beliefs "We Want Freedom"[2] and program of action "Build the Red Bases! The party was founded in 2004 after splitting from the Socialist Labour Party (SLP). The CPGB (ML) publish their own bimonthly newspaper, Proletarian. The Marxist journal LALKAR is closely allied with the party.

The CPGB-ML claims to be the voice of the true interests of the British working class, whom it maintains are the "ruing class in waiting". It published regular statements[3] and leaflets, and holds public meetings to promote these interests.

The CPGB-ML believes that there is no single British national interest, but that interests of the British working class are entirely different, and in many instances diametrically opposed to those of the ruling British financial and business elite who govern the country. The CPGB-ML maintains, in its publications and video broadcasts, that Britain is therefore not a democratic nation (ruled by the people), but a dictatorship of the financial oligarchy, clothed in a 'democratic shell'. It upholds Lenin's teaching on the state and maintains that Britain remains an Imperialist country.[4]

The CPGB-ML states that British imperialism and world capitalism are facing a profound capitalist crisis, which is driving them to make mass redundancies, and attack the social conditions of the working people of Britain by destroying the welfare state;[5] and believes that the same crisis is driving British capitalism to war abroad.[6] It campaigns against both these tendencies, claiming that a policy of positive economic construction led by working people in power is the only way to escape the crisis.

For this reason, the CPGB-ML actively opposes legislative attacks made by Labour, Liberal and Tory parties on the welfare state including the NHS, is active in the 'anti-cuts' movement, the anti-war movement and the anti-capitalist movement. Its positive position is that the working class, to solve the problems it faces, must seize state power, which cannot be achieved via the electoral process.[7]

The CPGB-ML was one of the only parties in Britain that did not condemn the youth riots of 2011, but characterised them as a rudimentary form of anti-capitalist resistance that lacked adequate leadership and direction.[8]

The CPGB-ML opposes so-called social democracy (represented in their analysis by the Labour Party) and what they term 'revisionist communist' parties that uphold what its chairman, Harpal Brar, describes as "the disastrous program of the British Road to Socialism."[9] The BRS claims that workers can achieve power and a socialist system by voting Labour, whereas the CPGB-ML states that history has disproved this thesis and it should be discarded.[10]

The CPGB-ML opposes all immigration controls as measures to misdirect workers and blame each other for the capitalist crisis. Migration has been a feature of human civilisation since the earliest times, and capitalism produces it on a wider scale than ever before. What is responsible for hardship among workers is crisis and unemployment.[11]

As of April, 2013 the CPGB-ML is noted as an ally of North Korea and for its anti-imperialist stance opposing efforts to discourage North Korea from acquiring nuclear weapons.[12][13] It has called for a defeat of British troops in Iraq and Afghanistan, and a movement of direct action and non-cooperation among British working people, in order to exert its political influence. The CPGB-ML has publicly campaigned within Stop the War movement, and among working people, for these positions to be adopted.[14]

The CPGB-ML calls for the withdrawal of British troops from Ireland and for a unified 32 county state to be formed. It supports Sinn Fein's leadership of the Good Friday Agreement, which it believes falls within this framework. The party also supports the struggle of the Palestinian people against Israeli Zionism, which it characterises as an apartheid state.[15]

The CPGB-ML publicly supports governments around the world which it perceives to be socialist or "anti-imperialist" such as North Korea,[12][13] Zimbabwe, and the People's Republic of China. It was one of the few British parties to consistently oppose NATO war crimes in Libya and Syria, and support the democratically elected, progressive and popular governments of Mummar Gaddafi and Bashar Al Assad.[16][17]

After careful analysis, the party accepted a position at its 2012 congress, that there are no separate English and Scottish nations, but rather, when those nations were at the point of developing as modern capitalist economies, their ruling classes joined together to form a "British" nation.[18]

The CPGB-ML believes in the widest measures of local democracy, but sees Scottish nationalism as a diversionary movement from building a really powerful working class movement across the whole of the historically constituted nation that is 'Great Britain'. It therefore opposes the limited measures that are being put forward as 'Scottish Independence', which it notes will not break the Union, the British state or the British army in any significant manner.[19]

The party was founded on July 3, 2004 in London.[10] The party effectively is a split from the Socialist Labour Party (SLP) of Arthur Scargill. The split was caused by Scargill's refusal to accept the positions adopted by the SLP congress, including its support of North Korea to defend itself against US agression by any - including nuclear - means necessary. Arthur Scargill was not prepared for the SLP to adopt what he perceived to be an orthodox Marxist-Leninist line, and therefore expelled the majority of the central committee and the entire Yorkshire region of 'his' party.[10][20] Those comrades went on to form the CPGB-ML.[21] Many of the founding members had previously been members of the Association of Communist Workers or the Indian Workers Association.

The Party also has a number of comrades from the early days of the British communist movement and the original Communist Party of Great Britain that was associated with the Third International. The current Honorary President is Isabel Crook, wife of David Crook, both were communists who were in Spain during the Spanish Civil War and later went to work for Mo Zedong and the Chinese communists.[22][23] Prominent former members include Jack and Marie Shapiro, veterans of the anti-revisionist movement and life long communists.[24]

The party's chairman is a retired university law lecturer, writer and businessman Harpal Brar, who has been editor of the Marxist-Leninist journal Lalkar (formerly the organ of the Indian Workers Association) since 1979. Harpal was a national leader of the Indian Workers Association throughout the 1970s - 1990s, which participated in and led many important working class struggles. He and the CPGB-ML, have published many of his and his comrades writings on aspects of Marxism. He is a defender of the record of the Soviet Union[25] under the leadership of the CPSU(B) and Joseph Stalin. He has written extensively and made presentations on the capitalist economic crisis[26] we are currently facing, the Chinese revolution[27] and many other subjects of historical importance to the working class.

His books include Perestroika, the complete collapse of revisionism,[33] Trotskyism or Leninism,[34] Social democracy – the enemy within,[35] Bourgeois nationalism or proletarian internationalism,[36] Imperialism – decadent, parasitic, moribund capitalism,[37] Chimurenga!: The liberation struggle in Zimbabwe,[38] 60th Anniversary of the victory over fascism,[39] Imperialism – the eve of the social revolution of the proletariat,[40] Imperialism and War,[41] Nato’s predatory war against Yugoslavia,[42] The British General Strike,[43] Capitalism and Immigration,[44] and Revisionism and the demise of the USSR,[45][46]

The party's vice-chairman and international secretary is Ella Rule. Ella rule has been active in the movement for 50 years, and has also written and published extensively. She has written a book entitled Marxism and the Emancipation of Women,[47]</ref> and co-wrote Imperialism in the Middle East,[48]</ref> among other works. She has researched and made presentations on class society in Britain, the economic crisis of capitalism and on the Katyn Massacre[49] and the world food crisis,[50] among others.

The party's general secretary is Zane Carpenter. He has made presentations on revisionism and the reasons the USSR collapsed.[51] 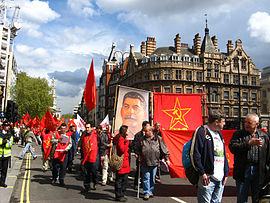 CPGB-ML contingent at London May Day march in 2008

The CPGB-ML adheres to Marxism-Leninism as they perceive it was developed by Karl Marx, Friedrich Engels, Vladimir Lenin, Joseph Stalin and Mao Zedong. They consider that, after the death of Stalin, Khrushchev and other revisionists in the Communist Party of the Soviet Union leadership undermined socialism to the point where the Soviet Union collapsed.

The CPGB-ML argues there is no separate ideology of Stalinism, which it believes is a term coined by Trotskyists,[52] and used as an 'insult' rather than accurate political characterisation.[34] The CPGB-ML is opposed to Trotsky's teachings which it considers petty bourgeois and anti-communist, and to modern-day Trotskyists, who it maintains are the agents of imperialism in the working class movement. Harpal Brar's book Trotskyism or Leninism[34] argues that Stalin and Mao were simply disciples of Marx, Engels and Lenin, who applied their teachings to guide workers' struggles in the concrete historical conditions they faced, with great distinction. He has presented his work at party schools and can be viewed on line.[53]

The party places particular emphasis on the importance of political education of its members and supporters in the classics of Marx, Engels, Lenin and Stalin, and a broad historical understanding of the world, including the achievements of the Soviet Union.[54][55]

It takes a keen interest in international affairs and supports the Irish Republican movement, the Iraqi Resistance, Cuba, the People's Republic of China and North Korea. Many CPGB-ML members were also active in the Stop the War Coalition until the party's expulsion in October 2011 over its support for Muammar Gaddafi in the Libyan civil war,[57][58] their respective trade unions and pensioners' campaigns. The CPGB-ML has declared its support for President Bashar al-Assad in the Syrian civil war, and supports the state of Palestine against Israel, believing Israel to be illegally occupying Palestinian land.[59]

CPGB-ML is also a party front 'Proletarian' which was formed in 2008. The party front was formed "to prepare for standing in elections", although they have not stood any candidates to date. The CPGB-ML's members spend time leafleting in public and attending marches, but understand that the working class will become a force only when they are organised and united with an advanced communist understanding of the nature of their oppressors and the means of their liberation. This is the main task upon which all their actions centre.