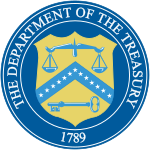 United States Department of the Treasury

The Office of Foreign Assets Control (OFAC) is an agency of the United States Department of the Treasury under the auspices of the Under Secretary of the Treasury for Terrorism and Financial Intelligence. OFAC administers and enforces economic and trade sanctions based on U.S. foreign policy and national security goals against targeted foreign states, organizations, and individuals.

The Division of Foreign Assets Control was established in the Office of International Finance by a Treasury Department order in 1950, following the entry of the People's Republic of China into the Korean War; President Harry S Truman declared a national emergency and blocked all Chinese and North Korean assets subject to U.S. jurisdiction. In addition to blocking Chinese and North Korean assets, the Division administered certain regulations and orders issued under the amended Trading with the Enemy Act.[3] 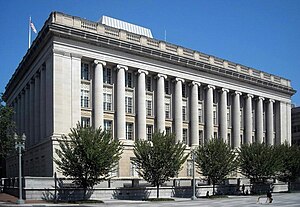 The Office of Foreign Assets Control is housed in the Treasury Annex, located on the corner of Pennsylvania Avenue and Madison Place, N.W., in Washington, D.C.

In addition to the Trading with the Enemy Act and the various national emergencies currently in effect, OFAC derives its authority from a variety of U.S. federal laws regarding embargoes and economic sanctions.[5]

In enforcing economic sanctions, OFAC acts to prevent "prohibited transactions," which are described by OFAC as trade or financial transactions and other dealings in which U.S. persons may not engage unless authorized by OFAC or expressly exempted by statute. OFAC has the authority to grant exemptions to prohibitions on such transactions, either by issuing a general license for certain categories of transactions, or by specific licenses issued on a case-by-case basis.[3] OFAC administers and enforces economic sanctions programs against countries, businesses or groups of individuals, using the blocking of assets and trade restrictions to accomplish foreign policy and national security goals. See United States embargoes for a list of affected countries.

Under the International Emergency Economic Powers Act (IEEPA), the President of the United States is empowered during national emergencies to block the removal of foreign assets under the jurisdiction of the United States. That mandate is then executed by OFAC through issue of regulations that direct financial institutions accordingly.

Between 1994 and 2003, OFAC collected over $8m in violations of the Cuban embargo, against just under $10,000 for terrorism financing violations. It had ten times more agents assigned to tracking financial activities relating to Cuba than to Osama Bin Laden.[6]

As part of its efforts to support the Iraq sanctions, in 2005 OFAC fined Voices in the Wilderness $20,000 for gifting medicine and other humanitarian supplies to Iraqis.[7] In a similar case, OFAC is still attempting to collect (as of 2011) a $10,000 fine, plus interest, against Bert Sacks for bringing medicine to residents of Basra.[8]

In October 2007, a set of Spanish travel agency websites had their domain name access disabled by eNom: the domain names had been on the OFAC blacklist.[9][10] When queried, the United States Treasury referred to a 2004 press release that claimed the company "had helped Americans evade restrictions on travel to Cuba".[9]

In the case of United States v. Banki, on June 5, 2010, a U.S. citizen was convicted of violating the Iran Trade Embargo for failing to request Iranian currency transfer licenses in advance from OFAC. On August 25, 2010, the Iranian American Bar Association announced that it would file an amicus curiae brief with the United States Court of Appeals for the Second Circuit on United States v. Banki.[11] It has also hired lawyers to request further guidance from OFAC on import of goods from Iran.[12]

OFAC is responsible for administering the SDN List, and when an entity is put on the terrorist list it can write to Treasury asking it to reconsider, but OFAC is not required to provide one nor provide any reason for their actions. Two federal court cases have found the current Treasury/OFAC process to be constitutionally deficient.

In August 2009, a federal court ruling in KindHearts v. Treasury found that Treasury's seizure of KindHearts’ assets without notice or means of appeal is a violation of the Fourth and Fifth Amendments.

On Sept. 23, 2011 the Ninth Circuit Court of Appeals upheld a lower court’s ruling that procedures used by Treasury to shut down the Al Haramain Islamic Foundation of Oregon in 2004 was unconstitutional. The court said the Fifth Amendment's guarantee of due process requires Treasury to give adequate notice of the reasons it puts a group on the terrorist list, as well as a meaningful opportunity to respond. In addition, the court ruled that freezing the groups assets amounts to a seizure under the Fourth Amendment, so that a court order is required.

The Specially Designated Nationals (SDN) List is a publication of OFAC which lists individuals and organizations with whom United States citizens and permanent residents are prohibited from doing business.[3] This list differs from the one maintained pursuant to Section 314(a) of the USA PATRIOT Act.[13]